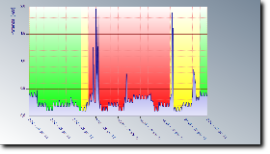 Everybody know that most modern electronic devices have a low-power mode when not in use (standby). Although the standby power consumption is certainly negligible compared to contractual power involved, may not be the energy consumption. We tend to believe that the energy consumed during these operations is minimal and, as such, not appreciable from an economic point of view. We will see below that, given the typical consuption levels of use of a residential facility, often this is not true. We have installed some ZeusLog products and carried out a campaign of measurements for a few days, a continuous monitoring of electricity consumption of some households. The obvious solution to evaluate this standby power is to disconnect all loads and measur 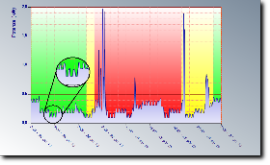 e the consumption in this particular condition. Unfortunately it is not as easy as it looks! Each of us possesses an infinite number of users and some of these cannot be disconnected easily: for example, the heating system, the freezer or a pump in an autoclave.
Fortunately, in most cases you do not need to disconnect any users: you can, thanks to a log with a good resolution, a suboptimal analysis easier and workable.
In order to figure out which’s the power consuption level either “lost” or “wasted” of our system, without disconnecting the loads, is important perform measurements of consumption which are sufficiently precise and with a good temporal resolution (5 minutes or less).
See (figure above) an example of typical power consumption in a residential installation. As you can see, there are periodic Absorptions (typically due to refrigerators and air conditioners) and Absorptions, dictated usually from use of appliances or lamps, above a “hoof” of constant consumption which we call “base” consumption due largely to standby devices present in your home.
During the night there are only regular power consuption users such as refrigerators and air conditioners superimposed base consumption. Looking closely at the example in figure it is possible to recognize moments when all loads, including periodicals, are off except for the devices in standby mode (see detail of second figure). Around the hours 3:00 am, in fact, you can find the absolute minimum standby consumption measure that, in the example, is approximately equal to 104 W. 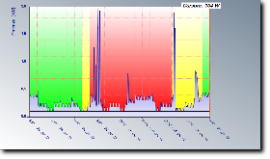 104 W consumption is small compared to the power consumption of contractual power involved (in this case amounted to 4, 5kW), but corresponds to an considerable energy and approximately 900 kWh per year for a cost of approximately 150-200 €/anno.
Largely this energy is “wasted” because it isn’t spent for any service, is basically lost energy! It’s clear with this consumption cannot be deleted, but, most likely, we will be able to contain them by finding and replacing appliances that mostly affect this “consumption basis” with more efficient devices or, if necessary, by turning off devices that do not necessarily have to stay on all the time.